We take a look at the men's javelin throw world all time best throwers and results. One man dominates the longest throws list.
Etusuora: 02.06.2021 12:37Athletics 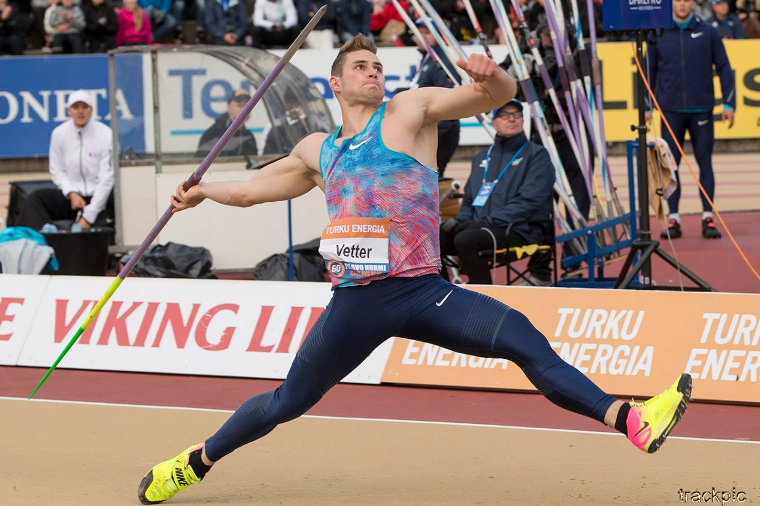 Photo: Olavi Kaljunen / Trackpic
Johannes Vetter
This article is based on the Tilastopaja statistics of the currently used javelin model. The A-mark beside the result stands for result made in high altitude.

Germany's Johannes Vetter has been dominating men's javelin lately. He rose to the second place of men's javelin throw's all time list with the current javelin model in 2020 after throwing an amazing result of 97,76 in Poland in early September.

The world record still remains with Czech Republic's Jan Železný who threw his WR of 98,48 in 1996 in Jena, Germany.

Alltogether 22 athletes have reached the incredible mark of 90 metres. Germany and Finland are the countries with the most 90 metres throwers: Germany has five, Finland three. Czech Republic has two throwes in the 90 meters club and Kenya, Russia, Greece, Norway, Great Britain, Taipei, USA, Latvia, Estonia, Grenada, Pakistan and Trinidad & Tobago have one thrower each over 90 metres.

The stats have been updated August 25th 2022

Finns in control of top 100


Now let's take a look at the compelete list of 100 best throwers.

The top 100 includes 34 different nationalities. Finland has the most entries with 15 athletes. Germany is second with 13. The top two are miles clear of the rest as Russia is third with eight top 100 throwers and the Czech Republic and Latvia have five athletes on the list.

Top 100 throws of all time: Železný leads, Vetter closing up


The top 100 list that we just went through included only one best throw by each athlete. When we broaden the scope and take into account all the throws by each athlete, the list gets a little one-sided.

The world record thrower Jan Železný's name is mentioned in the following top 100 throws -list staggering 33 times. Železný has thrown five of the ten longest throws of all time.

Germany's Thomas Röhler is the first name on the list behind Železný and Vetter. Röhler holds the 13th position with his PB of 93,90.

11 nationalities are included in the top 100. The Germans and Finns are on top also on this list as Germany has 4 athletes on the list and Finland 2. One thrower each for Czech Republic, Norway, Russia, Greece, Latvia, Kenya, Great Britain, USA and Taipei.

15 different athletes are found in the top 100 throws list. As mentioned Železný still rules the list with an incredible 33 top throws. Vetter has the second most entries on the list with 25, Röhler is third with 7.